The Fertilizer Market – What Happened and Where It Is Going

An examination of the fertilizer market provided by Josh Linville of StoneX Financial looking at the global markets, political intrigue, weather, and, yes, Covid.

Josh Linville is the Director of StoneX Financial Inc., a capital market company founded in 1998 with satellite offices all over the US, and six of the seven continents, because you know, Antarctica, connecting clients to the global markets’ ecosystem through institutional-grade platforms, end-to-end clearing and execution, and high-touch expertise.

Providing a global analysis, Linville offers a market analysis of the fertilizer sector, explaining how we arrived where we are, and a prognosis for the future. Please note that Linville’s talk occurred prior to the Russia invasion of Ukraine. While acknowledging the possibility, he was unsure how global governments would react—though it does not affect the overall performance of the information provided, it will.

Linville expanded upon the data provided by Glen Buckley, who provides StoneX with an independent fertilizer analysis.

Fertilizer, per acre, is a large cost to farmers, and yet as of 2022, prices have more than doubled—which could affect a farmer’s bottom line and/or fuel consumer costs to purchase food.

So… what happened to fertilizer prices?

“A lot of the fertilizer market looks at the US information and determines if the prices are going up or down,” began Linville. “And because we are partners, Canada takes a lot of its price cues from the US, as well.

“This is just the information as I see it, take it for what it is,” he offered as a disclaimer.

The US, he said, looks at the Crop Acreage Outlook, comparing crop usage designated for crops in the 2020 and 2021 growing seasons—and yes, Linville will get to how it all relates to the fertilizer market.

Looking at corn, soybeans, wheat, cotton, etc., Linville said that only minor changes are expected in acreage in the corn belt “but that could shift depending on relative crop prices.”

“But,” he said, “I am here to tell you that these numbers are wrong.” He noted that the 2021 numbers are still estimates, predicting that the 87.2 million acres for soybeans in 2021 might actually be closer to 90 million.

But why do fertilizer prices change all the time?

What happened to the nitrogen market?

“We watched the NOLA market—New Orleans-Louisiana—because it’s the most liquid North American market out there,” said Linville as he offered his take on just why fertilizer prices are so high.

How We Got Here
Factors driving the current markets take root from August 2020, when there was a drop in crop production and a spike in crop prices seen mostly around corn. “If farmers could have planted down the middle of an Interstate, they would have done so,” he jokingly noted.

At the same time, COVID-19 cheques were dispersed creating a massive influx of cash to the farms and often enough, according to Linville, fertilizer was the first thing they bought. “The fertilizer market went from no demand to an incredible demand in a very short period of time,” he said, “And we’ve been playing catch-up ever since.”

Yes, it began slowly, but it picked up speed beginning in February 2021 when it got cold in Texas, and there was a spike in nitrogen production facilities. But they had to shut down plants because of a lack of ingredients or because the price shot high enough that they could sell it elsewhere making more money than they could making fertilizer, opined Linville.

A huge Spring run on fertilizer reduced reserves down to virtually nothing, and then came Hurricane Ida in August knocking power out for a couple of weeks, adding to further plant shutdowns and lost production owing to a lot of nitrogen production in the area.
The summer’s drought brought about reduced corn production and a lower-than-expected output.

By September, there were supply chain issues—a global phenomenon—with a lack of shipping vessels, long demerge and a jump in rates. An energy crisis in the EU—under Russia’s thumb, said Linville, also led to plant shutdowns and a jump in imports. Then there was the China export ban on nitrogen as it saw the shortages around the world and said it wanted to take care of itself first; and India’s reduced production causing a supply shortfall.

In October, thanks to limited tonnage offered, it increased to record pricing.

“Here’s the thing, if I had told you two years ago that (the above things) would happen and take us from record low prices to record high prices, I’m pretty sure most of you have said you have better things to do than listen to this moron talk,” suggested Linville. “But this is what happened… 2021 will come to be recognized as the perfect storm of events, and this is why we have the record high of prices we see today.”

He added: “If there is one thing you can take away from me, is that you better care about what is going around in the world.

“It matters to Canada.”

He provided detailed examples of the nitrogen fertilizer types—Urea, UAN, and Ammonia, and how differing parts of the world are the major producers. Half of the inputs come from the Middle East region. Fifteen percent of our imports come from Russia.

Linville said that even with his 20 years of experience, and talking to others with decades more experience, he has never seen a time when there was a situation like this where there is no supply.

A Look At Urea
In an examination of supply and demand data, Linville pointed to expected Urea imports for 2022 at 5.6 million tons, and the Spring 2022 ending inventories of just 335 million tons, which is still better than it was last year (251 million tons).

“Now don’t get me wrong, we will find your product,” he intoned. “You just may not like the price or the time, but we’ll find it eventually.”
He said that since hitting the high price marker, it has come down a bit.

But markets are wary of it dropping to previous year lows.

Touching on what a Russian invasion could mean, Linville noted that sanctions could mean that their product would still manage to find a home, with a significant mark-up for whomever is purchasing it. A complete lock down, however, would have a huge outcome on the global fertilizer market.

“Why do we care about what happens in Russia – they provide 14% in global Urea trade.”

He suggests that farmers could switch from using Urea to UAN—where there is a huge price differential. He said that with the average usage of Urea on an acre of corn is about 155lbs, farmers would save between $40-$50/acre by switching to UAN. He predicts a huge surge in demand for UAN because of this.

What’s Going On With UAN?
“Since hitting the high price… crickets,” stated Linville, adding that unlike Urea, UAN has not dropped in price. His reasoning: “It doesn’t have to, because it’s a fairly tightly controlled marketplace, with few producers out there.”

He pointed out that five companies in the US control 95% of the Urea production capacity.

“I talked about Urea being tight, but it’s nothing compared to UAN,” he said.

There had been UAN talk and an anti-dumping duty rate targeting Trinidad and Russia. While most expected it to be inconsequential, the proposed targets are 63% for Trinidad, and 9-24% depending on the Russian producer.

These two countries were targeted because they lead the way in UAN exports to the US, accounting for 78% (Russia at 42%; Trinidad at 36%).

Because UAN is a small market, one cannot simply purchase it from other countries. Canada, North Africa, and others account for the remaining 22%.

With the duties on the two—along with Belarus and Ukraine involved in a war—getting ahold of Urea is going to be difficult. “There is no White Knight. There is no cavalry,” explained Linville, adding that we are now seeing MAP (Monoammonium phosphate) and DAP (Diammonium phosphate) rise in fertilizer pricing.

Linville pointed out that in 2008, phosphate prices were just under $1,100/ton. “Although current market prices aren’t cheap, the price is significantly lower than that high.

“But, this is still only the second-time in our history that we have seen phosphate prices this high.”

In 2021, The Mosaic Company won a countervailing duty case against the imports of phosphates from Morocco and Russia with the US Department of Commerce, an outcome that is contributing to the higher phosphate pricing.

From an American point of view, Mosaic now controls 88% of the market by effectively cutting out two of its biggest competitors in Morocco and Russia.

In 2020, Morocco provided 73% of the DAP/MAP product to the US, Russia 16%, dropping to just 7% and 5%, respectively in 2021. Saudi Arabi was the big winner here, going from 7% of the US market to 32%. Jordan suddenly gained 17% of the US market, while Australia received 11%. The remaining 29% of the US market was provided by other countries—so huge gains for all of them, considering they had only contributed 5% in 2020.

While it is great that Australia is providing product to the US, Linville was shocked that so much of it made its way to the US. It’s a lot of mileage, and a lot of cost.

In case you are wondering why Mosaic did not target Saudi Arabia: “Guess who owns a part of that plant (in Saudi Arabia)? Mosaic,” stated Linville.

“They have a very sizable ownership in that plant. Why would you put duty against yourself?

He said that although the US has a lot of phosphate available for production—down in Florida, it is not utilized because tourism drives that State’s economy.

Explaining the difference in phosphate prices between the world and North America, Linville indicated that India is paying about $920-$930 per metric ton, and that North American is garnering some of the least expensive in the world trading at around $693 a standard ton.

“Even though it doesn’t feel like it, we have some of the lowest phosphate (prices) in the world,” he summed up.

Factors to watch for in the future:
• Chinese exports, or the lack there of;
• Russia and Ukraine;
• Grain price appreciation/depreciation.

Factors driving the current market according to Linville are: Derecho event; COVID cheques; solid Fall and Spring demands reducing inventory to lower-than-normal levels; earlier than expected loss of Esterhazy K1 & K2 mines in Saskatchewan due to brine inflows, losing 1-million tons of potash—Mosaic owns these Canadian mines, and has indicated it would resume production at its Colonsay potash mine near Saskatoon to offset lost production; little to no response in terms of higher production rates; continued strong demand in terms of high corn acreage for 2022; the Belarus/Russia situation in Ukraine.

But consider that Belarus and Russia ate into what the US exported—numbers that will not hold true in 2022 for either because of war in Ukraine.

“That’s something to pay attention to—Russia and Belarus have one-third of the world’s capacity for potash,” related Linville. “And when you add in China’s friendship with Russia… Potash is a very regionalized product.”

Factors to watch for:
• Russia, Belarus and Ukraine;
• Any production hiccups or increase in production;
• Grain price destruction—if farmers say they must cut a type of fertilizer because of crop pricing—potash is usually the first to be affected.

“Try to remove as much emotion as you possibly can,” summed up Linville, “Make fundamental and logical decision making your buying or selling plans.”

Agri-retailers should not wait for farmers to tell them how much fertilizer they want, you should go to them and ask them how much they anticipate they require.

For information on StoneX, visit https://www.stonex.com/. 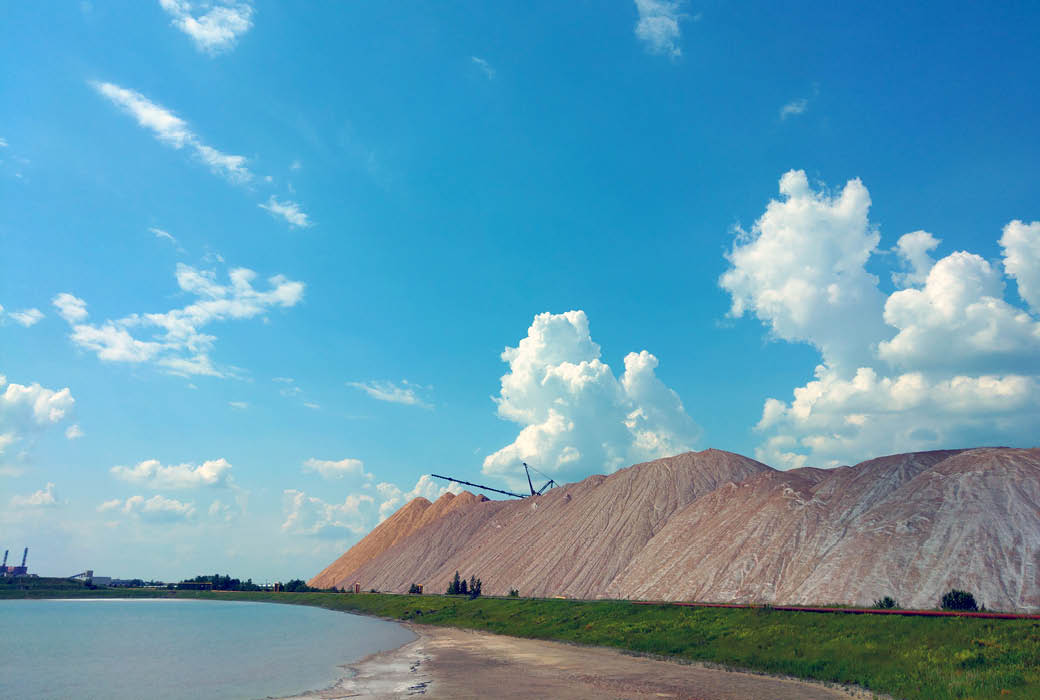 Interested in print and/or digital advertising in one of CAAR’s publications?

To learn more about the marketing opportunities available to you, contact: