In the summer of 2019, sales reps, retailers and farmers gathered at demonstration plots across the country, taking advantage of the opportunity to see in person how crop inputs work in the field and to build relationships. What a difference a year makes.

This spring, as COVID-19 spread around the world and into our communities, suppliers and retailers worked to move hundreds of plot tours to online platforms that could still deliver the experience and information farmers expect from in-person tours while respecting ever-evolving provincial health orders.

Justin Gayliard, senior manager for customer solutions at BASF Agricultural Solutions Canada, says they made the decision to pivot from their annual summer events, BASF InField Innovation
Tours, into a virtual experience in mid-March. He says, posting the tours online seemed like the best option to keep farmers and their employees safe.

"We wanted to make sure that we had an environment where we could still bring people together and allow them to understand and see what was going on," says Gayliard. "One idea that we started to drive towards was the virtual tours."

ADAMA Agricultural Solutions Canada Ltd., was well into the planning stages of their summer tours, ADAMA’s Learning Local, and had finalized their sites in March. At the time, they still believed their plot tours could have been done as in-person events. Jodi Starodub, demand creation manager for Canada at ADAMA, says as the pandemic quickly spread, the virtual tour became their only option.

"The virtual tour concept really started to take hold once we realized that it probably wasn't going to be a normal year," says Starodub. "We needed to think about how we can do things a little bit differently."

ADAMA wanted to focus on simple, real content that was informative and timely, says Starodub. Their employees recorded content on their cell phones and clip-on microphones.

Capturing content at the correct time did become a challenge. Some shots were tricky to shoot, where employees had to be in the right place, at the right time, like fungicide spraying.

"In a spur of the moment, one of our sales reps could be walking into a plot," says Starodub. "We wanted them to be able to capture that, just as they would have if they were standing in front of a farmer talking to them in that same plot."

They also asked their area business managers to work with their retail partners to contribute content. Getting retailers engaged was not difficult says Starodub as they understood the importance of the virtual tours and were committed to their role.

Mike Preston, general manager at Core Ag Inputs Carstairs in Carstairs, AB, and one of ADAMA's independent retail partners, says they wanted to work with them because of their excellent
relationship with their local rep.

"We chose to work with ADAMA on the chemistry side of things and for the simple fact that our local rep here is really good to work with," says Preston. "We felt that they was really good for what we were looking for." 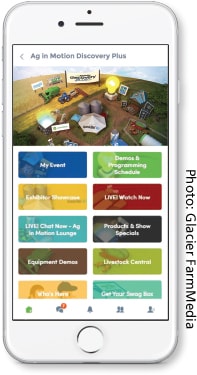 Preston says his team recorded and edited their cereals test site content for the virtual tours in only a few weeks and promoted the virtual tour on their Twitter and Facebook pages. They also sent the finished plot tour videos to their customers and suppliers that participated in the virtual tours.

The virtual tours made creating unique product messaging and value proposition by province easier to do, says Starodub. ADAMA’s retail partners’ ongoing commitment, engagement, and dedication to the virtual plot tours were just as important as the content themselves.

Gayliard says BASF did not want to recreate the experience of an in-person tour in a virtual tour but instead wanted to focus on bite-sized clips and shareable content, giving growers and retail partners the option to create their own virtual tour experience.

"This was a big collaboration across a large team. It was definitely something that we haven't done before," says Gayliard. "It was definitely an all-hands-on-deck process to bring everything together."

With hundreds of sites across Canada, capturing the research plots on video was a huge collaboration between professional video production teams, local BASF reps and team members from around the country, and BASF’s marketing partner Kenna.

Instead of recording retailers’ trial plots for the virtual tours, the virtual tours were recorded on the BASF Research Farms in Lethbridge, AB; Strathmore, AB; Vanscoy, SK and Winkler, MB. By the end of the growing season, BASF would have its fifth tour recorded in their research farm in London, ON.

“We didn't put the request out to retailers this season, but I think it's an opportunity for us to include retailers going into the future,” says Gayliard. “We really focused on the five different research farms to make sure that we had that experience across different geographies within Canada.”

To provide more relevant, local content, BASF sales team and technical services employees also contributed to the content and relied on simpler techniques such as personal cellphones to capture videos and lapel microphones to prevent background noise in the audio.

"We've been quite happy with working through those challenges," says Gayliard. "It has definitely not been easy, given the fact that we were in the middle of a pandemic throughout it."

Gayliard says the virtual tours brought an added value for BASF's retail partners. In-person plot tours could only accommodate a limited number of people per tour at specific times. Gayliard says they wanted their virtual tour to be a convenient shareable resource, with information retailers expect from an in-person tour, like new products and performance trials.

The one thing that we probably miss the most is just that relationship building that you have when you get to stand belly-to-belly in a field.
Jodi Starodub

Between July 27 to September 14, the BASF InField Innovation Tours microsite had over 41,000 page views. The microsite tracked site visits and content with the most traffic, but the most important feedback came from retail partners and growers. What they liked about the virtual tours, what they want more of and how they could improve their content are some of the feedback BASF received.

"It does help to drive out some insights and allow us to continuously develop and improve upon what we've launched in," says Gayliard, "Hopefully, we can make it better, more informative and more useful for more people as we go forward."

For BASF, the virtual tour came out of necessity and they are planning a return to in-person tours when that option is available. They do plan to continue to use the online platform as a complement to their future in-person tours though.

“We're going to continue moving forward with virtual tours,” says Gayliard. “We want keep the content fresh, making sure that we complement our in-person tours and continue to connect with folks.”

BASF already started working on next year’s virtual tour. Gayliard says they want to include a live chat option called “Live from the Field”. The live chat would give growers and retailers a chance to speak to BASF employees in real-time. Although ADAMA's Learning Local tours went well, Starodub says a virtual tour does not replace the relationship building a person gets from an in-person tour.

"The one thing that we probably miss the most is just that relationship building that you have when you get to stand belly-to-belly in a field," says Starodub. "Unfortunately, we're not able to have those types of conversations right now."

The upside of the virtual tour experience is the farmer can take it anytime, anywhere – rain, snow or shine.

"In the past, we would have a day planned for a tour, and Mother Nature would decide that it was the day for rain or gale-force winds," says Starodub. "The one nice thing about having a virtual tour is that you don't put all your eggs in one basket."

In a typical summer season, Preston says Core Ag Inputs Carstairs would have up to 120-130 people per tour group in their largest test site, cereal seeds production. They still hosted a physical plot tour on their site this year but in much smaller groups. He says Core Ag Inputs Carstairs would like a return to face-to-face tours someday, with an added focus on shareable social media content.

“At the end of the day, we all want to get back to get in front of our customers and taking their questions and having relationships with them in the field,” says Preston.

Ag in Motion (AIM) normally attracts thousands of farmers and hundreds of exhibitors over five days on location near Saskatoon, SK. Rob O’Connor, show director for AIM, says the pandemic gave them no choice but to move AIM online and evaluate how to create an immersive and valuable experience for farmers and exhibitors.

“In a live trade show, farmers would come up to your booth, but in the virtual world, there isn’t that shiny piece of equipment or that cool crop plot to drive you to that company. Companies needed to initiate that interaction with farmers,” says O’Connor.

Exhibiting companies learned how to use the tools on Swapcard, AIM’s chosen online conference platform, to take actions like invite farmers to their online booth. O’Connor says it was rewarding for his team to work with supportive exhibitors on learning the new format.

“Our team had to explain how the platform worked to our exhibitors who had never seen it,” says O’Connor. “Ag in Motion has been successful in the past, that’s a lot of goodwill we were getting from our companies.”

By day two of the five-day event, there were over 6,000 individual attendees. Overall, the exhibitor showcase offered farmers 240 online sessions, roundtables, and seminars. Farmers who registered for Ag in Motion Discovery Plus can still view the content online following the close of the show.

2021 CAAR Conference to be Held Virtually

The Canadian Association of Agri-Retailers (CAAR) also faces a challenge like AIM’s, turning its historically in-person conference into a completely virtual experience.

The CAAR Conference Planning Committee along with association staff, are currently planning the association’s first ever virtual conference to be held Feb. 9 – 11, 2021.

Lisa Defoort, communications and event manager at CAAR, says she expects the conference to provide exhibitors, speakers and members the same level of information and resources they look forward to every year.

“The 2021 Virtual CAAR Conference will include informative webinars hosted by industry speakers, opportunities to connect with exhibitors, sponsors and fellow retailers from the comfort of your own home or office,” says Defoort. “We are excited to explore new ideas through a virtual event and develop new ways of connecting with our membership.”

Along with speaker sessions, Defoort says the committee and staff are planning to put many of the great events that go along with the CAAR Conference online. This will include the CAAR Pro-Ag Investments Auction and the annual CAAR Awards.

“We care very much about the health and safety of our CAAR members. We understand that moving the event online means missing out on some of the face-to-face connections we all look forward to each year, but we are dedicated to keeping our members safe.” says Defoort. “We thank all of our CAAR members for their support, even more so now as we move the 2021 CAAR Conference completely online.”

Visit caar.org/caar-conference to submit a nomination for The CAAR Awards.

Interested in print and/or digital advertising in one of CAAR’s publications?

To learn more about the marketing opportunities available to you, contact: