When growers are dealing with crop diseases like blackleg and clubroot in canola and fusarium head blight in cereals, crop varieties with genetic disease resistance are one of the most valuable and important tools they have to help manage the disease in question.

“A good strategy for combatting any disease is to have a good mix of disease resistance,” says Kevin McCallum, general manager of DL Seeds, a breeder of canola hybrids based in Morden, Man. “This is one of the most important tools for limiting disease on a grower’s farm.”

If you’re growing the same resistance genes year after year, it’s very easy for disease pathogens to overcome, or to get around, your resistance and then you have resistance breakdown.
Kevin McCallum

However, the ability of disease pathogens to adapt to overcome genetic resistance threatens the effectiveness of these tools. If varieties with the same resistance genes are continually planted, the risk of adaptation increases.

“If you’re growing the same resistance genes year after year, it’s very easy for disease pathogens to overcome, or to get around, your resistance and then you have resistance breakdown,” says McCallum.

Clay Casavant is an agronomist with AgriTeam Services Inc. (AgriTeam), an independent retailer with locations in Hafford and Glaslyn, Sask. Working out of the Hafford location, Casavant says his customers primarily grow canola and wheat, and while he considers them lucky not to have clubroot (yet), blackleg and fusarium are both recurring issues for his growers.

When helping his growers select resistant canola and wheat varieties, Casavant is always aware of the need to use these tools sustainably, by choosing different varieties to prevent pathogen adaptation.

“It’s important to rotate to varieties with a different genetic resistance package so that you’re not continually setting yourself up for the disease,” says Casavant. “Or, if you for sure have the disease, at least you’re not creating conditions to get the same strain over and over again.”

According to Alberta Agriculture and Forestry, each time a resistant variety is grown in a heavily diseased area equals one less time those same genes can be successfully used in the future. Rotating resistance genes helps to ensure genetic resistance is preserved for as long as possible.

When it comes to staving off blackleg, if a grower is taking the “canola-snow-canola” approach to their rotation, Casavant believes they should be rotating their varieties every season, or at least every second season.

“If growers know for sure that their soil has blackleg, I would definitely be changing it every time,” says Casavant. “I’m scared those pathogens are going to get an immunity to each strain of the gene that we’ve built a resistance to.”

Casavant says recent changes to the way seed companies label their canola seed has made it easier for agronomists to help their customers select varieties for blackleg. Up until recently, Casavant says seeds would be simply be labelled “R” for resistant to blackleg but didn’t specify which of several blackleg strains the seed was resistant to.

He says it was frustrating to switch varieties without knowing if the new choice was resistant to the same disease strain as the previously grown one. “It was more like switching varieties for the sake of switching varieties than to effectively fight blackleg,” he says.

But now, Casavant sees it being much easier to make recommendations for his customers, because he is able to see which genes were last grown in a field that buckled under blackleg.

“This year I found some fields that had blackleg, and now I can look back and say, ‘I know this variety had Rlm3 resistance gene in it. Okay, that one obviously didn’t work, next time we’ll try RlmS,’” he says. “It’s going to make it much easier, and now we can really start to put some good agronomics behind our selections.”

Better labelling for blackleg resistant-varieties sees one challenge down, but there are still a few stumbling blocks Casavant encounters with his customers when encouraging them to rotate resistance varieties. One challenge is the somewhat common attitude of “Why fix it if it isn’t broken?”

Casavant says growers who do have confirmed cases of blackleg are willing to make the variety switch, but it can be hard to coax growers out of a reactive mindset into a more proactive one. 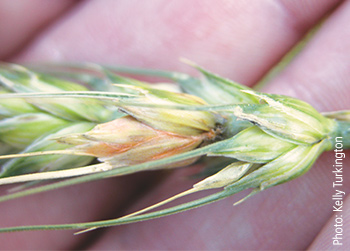 “‘Why fix it if it isn’t broken?’ That’s the pushback I get,” says Casavant. “Sometimes it is hard to make guys see that they really don’t want to lose this tool out of their toolbox.”

This is where McCallum says good education can start changing mindsets and habits of growers, encouraging them to use good management practices. Even though it can be a challenging task, McCallum says the strong, often personal relationships between retailers and their customers puts agronomists in the right position to deliver messages directly to growers.

“There are several actions I think agronomists can take. First is the communication part, making sure that growers are aware of the diseases that are the biggest concern in their areas and what is being offered in terms of resistance,” he says, adding that there are new clubroot resistant varieties coming onto the market that offer updated resistance to the newest generation of the clubroot pathogen.

Whether it is blackleg, clubroot or fusarium, ag retailers can help their customers maintain the integrity of resistance genes for future growing seasons by educating growers about the importance of using resistant varieties strategically and sustainably to slow or prevent disease adaptation. And although he sometimes faces some opposition, Casavant believes growers are getting the message.

“We’re doing everything we can from the education standpoint. We have ongoing conversations, we host education clinics in the winter,” says Casavant. “Even if there’s some pushback, our customers are still going home and thinking about the subject. I think growers are really starting to get it.”

To read more about how ag retailers are helping customers with disease management, read “Clubroot Emerging,” originally published in the October 2018 issue of The Communicator.